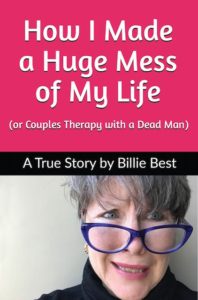 Billie Best has written an uplifting memoir on conquering the modern midlife crisis — How I Made a Huge Mess of My Life (or Couples Therapy with a Dead Man) — On Sale Now!

Read the new rules of middle age written by a woman. In this uplifting memoir Billie Best tells the story of her passage from her 40s to her 60s when everything in her life changed.

Three months before her husband’s death he invites his mistress to spend the weekend with him and his wife. It doesn’t go well, and the emotional scars are permanent, triggering a cascade of rage, neurosis and obsessive-compulsive cleaning. It takes years for her to unravel the secrets buried in their marriage. Then she discovers some forgotten secrets of her own. To recover her sanity, she has to admit that her tidy memories are not the truth. The truth is messy.

Poignant humor on the power of women in midlife, marriage breakdown after 30 years, what to do when your husband cheats on you, how to deal with a midlife crisis, how to plan your own death and die at home, how to move forward after becoming a widow, downsizing and starting over.

Buy it from bookstores at Bookshop.org and IndieBound

Get the details and media kit at Widowspeak Publishing